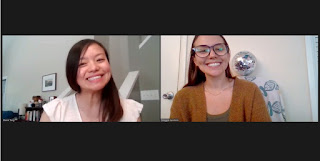 Tell us a bit about yourself.

I was born in Hong Kong, but my family moved to New York when I was very young. I consider myself an Asian American, though technically, I am an immigrant. My daughter is a first-generation Asian American here. My daughter is going into high school this year, which’s great, but I have a little bit of anxiety about it because, for the last 11 years, we’ve been living in Shanghai. When she was eighteen months old, we got a job offer in China, and we found it to be a great opportunity to try something new. It is a cool city to be in, I liked what I saw, and I thought if I could get a job there and stay awhile, let’s see where it would take us. So, we stayed, and my daughter pretty much grew up there. But after a decade. it was time to come home. Our pup, Ginger, who we adapted when we were over there took the trip back to America with us as well.

It was a great experience. I’ve always regarded myself as Asian American and all that comes along with it, but being able to go to China and experience the true Asian culture was an experience I was so blessed to have had. Many of my stories revolve around Chinese culture.

How long have you dabbled with writing?

I guess every writer has had this within them, but I have always loved writing. I’ve always just written stuff. Even after all the moving around, I still find random stuff I’ve written here and there throughout the years. I decided in 2017 to pursue children’s picture book writing, and I realized this is what I want to do. I love writing, so I had to hone in on picture books, to truly learn about the craft and find that elusive “voice.”

When I was in China, I got a job as a preschool and kindergarten teacher. That was a huge influence being around children and books. But what’s funny is whenever you start to tell people that you write picture books, they all believe they can write one as well. They’re always like, ‘oh, that’s easy, there are so few words,’ and that can sometimes be discouraging. I have learned over the years that it is one of the most difficult things to do. You’re writing a full-on story in less than 500 words, and that is not an easy task to take on. That is why I am so excited about this opportunity, and I am so lucky. In these three to four years, I’ve been writing a lot, doing a lot of webinars, and putting myself out there to get here, and it is certainly cool to be here.

Did you have a favorite book or author from childhood that shaped you as a writer?

I can’t really say I have a favorite. One of the reasons is because no one read to me when I was a kid. I didn’t read, it’s embarrassing to say, but I didn’t really read for enjoyment until I was in college. This however, has led to another passion of mine which is reading aloud with children. I have even written a book about it, and it was something I did as often as I could as a literacy teacher when I was working abroad. It must not have been until kindergarten when teachers and librarians when I heard stories read aloud. And at that point I was still an English language learner. But because when I was very young, no one read to me. I can’t say I have a favorite book because it wasn’t really a part of my life. One of the things I want to do is change that part of the culture. I want Asians to realize how important it is to read aloud to their children. It is very important for kids to read in terms of phonics, which is typically the focus for Asian parents, but reading for enjoyment is something totally different. I want to bring entertainment reading to the culture.

Do you have specific audiences you are trying to reach/who do you write for?

Culture-curious kids. Kids who are interested in exploring different cultures. I have narrowed it down to the things I find common in the stories I write: sharing Asian culture with young people. There are so many great aspects that American children can pick up on which deal with food, mindfulness, and of course, family. Those are the three main threads I find in my stories.

What is your favorite subject to play within kid lit? Do you like heavier topics or to keep it light?

Heavy for sure. I overthink things way too much. That’s not necessarily a good thing but it’s fun to overthink something and cut it down to 500 words. For example, I have a story about death. When we think about death, it’s usually sad, and it is sad to see someone go. But my story is about a Tai Gong or, great grandfather, who’s lived until he was 100 years old. It’s about a little girl experiencing her great grandfather’s Chinese death ceremony. In this story I am trying to express the celebration of life that comes after death. Though I do love humor, I like to stick to heavier topics.

People can tend to be sensitive when it comes to heavy topics, and you have to be sensitive when it comes to children. But I don’t know. I kind of don’t want to fall victim to playing it safe with the more controversial topics. I think there is a lot of value in hard-hitting lessons, such as kids being mean to each other and that we can find ways to express it that feel good to read. It’s all about moving the main character so they can become the hero they are meant to be.

How was the PBParty successful for you?

Since I moved back to America in July, I’ve been dabbling in contests when I could. I never did a PB Party before when I was in China, and to be honest, I had no idea what I was getting into. Which may sound naive, but I had no idea what it was. I am not on social media, so I just kind of went headfirst into the contest. But I was so excited when I became a finalist. I thought I was just going to get a conversation with an editor or an agent. But then, about a week later, I checked the blog posts and reread them, where I saw that editors and agents would possibly request manuscripts. And because I hadn’t checked, there were TEN requests in my inbox!!

At the end of the year last year, I also enrolled in the 12 x 12 contest in hopes of winning a scholarship for the program, and I won, which was incredibly exciting. But the PB Party was different. You become a finalist, and you are suddenly a winner. There were forty and fifty finalists out of the over one thousand contestants who applied. I was so excited to see my inbox pouring in. I was so surprised, but I sent what I had to, and the first one I sent was immediately rejected. But the next four requested more of my work. So, it was a roller coaster. I was excited one minute and then remembered that the rejections were also lurking around the corner.

But now I am with Marisa, who has been wonderful. I’m really excited to continue writing and learning about the process.

Is there anything you want to tell other writers who may be interested in the same event?

Just go for it! I was recently in a Highlights Foundation story plotting course, where many people were wondering how they would get attention from agents. My advice to them is to do these contests, do these pitch parties. There is an application process, just like anything when trying to submit your work, but it’s worth it. Not only do you get to practice pitching and querying, this amazing community of writers begins opening up to you. It always blows me away how much children’s book writers pay it forward and really want to see one another to succeed.

The final question is there any advice you can offer to aspiring writers who may read this?

There is a lot of work, research, and learning that goes into this. But at the end of the day, you have to keep writing what you truly want to write. Because everyone is sort of in the search for an agent, people could fall for writing something that doesn’t necessarily match their passion or their core values as a writer. I think the key is to stay authentic. Find your thing and keep writing it. When it comes from inside, that’s where the best stories come from. Take the craft and information you learn but implement them into the stories you are passionate about.